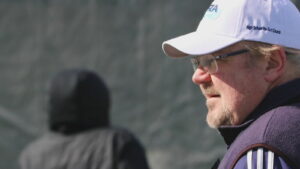 Click to watch the video
SOMERSET, Mass. (WJAR) — It’s the 50th anniversary of tennis at Somerset-Berkley Regional High School. For nearly the program’s entire inception, Doug Chapman has been the heart and soul.

“I played on the first four teams and after two years, I took over as coach,” said Chapman. “I was 19 when they hired me and I was still a student at Boston University.”

Forty-four years and 10 championships later, Chapman still has the same passion for coaching that he did in his first season.

“It’s obviously a passion,” said Chapman. “Hopefully, I can impart that passion on the kids and we can have a great team. It’s a lifetime sport. I think that’s one of the best things about tennis is that you can play it forever.”

In all of his years of coaching, Chapman has never denied a student-athlete the opportunity to be on the boys’ tennis team. He has received national awards for his no-cut policy two times.

“The no-cut policy is very crucial for this team,” said senior captain Tyler Barros. “Most tennis teams have a cut, so if you’re not good or skilled enough you won’t make the team. This team is so inclusive. It allows a lot of players from many different areas to come and play the sport regardless of the experience that they had. Some people may have not had access to good equipment or have been able to develop their skills, but with this team you can improve your skills no matter where you are, and meet people from all walks of life.”

“You could be cutting a player whose whole life would be impacted,” said Chapman, on his policy.

It’s a scenario that is familiar to the longtime coach.

“We used to cut to 24, which was still more players than anyone else had. This one year it would have meant cutting a freshman who would have been the only one cut.”

While Chapman didn’t know if the student-athlete would take to the sport, he gave him an opportunity to be on the team. He is thankful that he granted the boy the opportunity. He would go on to win a singles championship, make an all-state team and play four years of college tennis. Additionally, he met his wife through the sport and has two daughters who currently play tennis.

“What if I hadn’t got that shirt for him? It probably would have totally changed his life. He would have never gone back out,” said Chapman. “The kids who start at the bottom, it means more to them when they get to the top. I don’t look at it as a negative, I look at it as a potential positive and give everybody the opportunity. They still have to do it, they still have to listen and they still have to put the time in. If they do that, they have a good chance of succeeding – not just in tennis, but in everything.”

“My freshman year, I was at the bottom of the ladder. If it was a cut team, I wouldn’t be here right now. When I started, I couldn’t even keep the ball on the court,” said Rose. “Chapman accepted me on the team as long as I worked hard. He gave me the passion to do so. I wouldn’t be the same without coach.

Now, the Blue Raiders are looking to give back to the longtime head coach. The team’s next win will be the 600th in Chapman’s career.

“I can only imagine the dedication that has been needed to get to this point,” said sophomore Joseph Ramos. “Looking at it from an outside view, it something I can’t put into words. I am looking forward to witnessing this milestone with my team and helping him get there.”

“It means I’m old and I’ve been around for a long time,” laughed Chapman. “I’ve been fortunate to have a lot of kids … kids who have ability – whether they had it coming in or not – kids who listen, kids willing to learn and kids willing to get better. They’re the ones who hit the shots. They’re the ones who get out there and play, so it’s really for all of them, but it’s nice that I get the credit.”