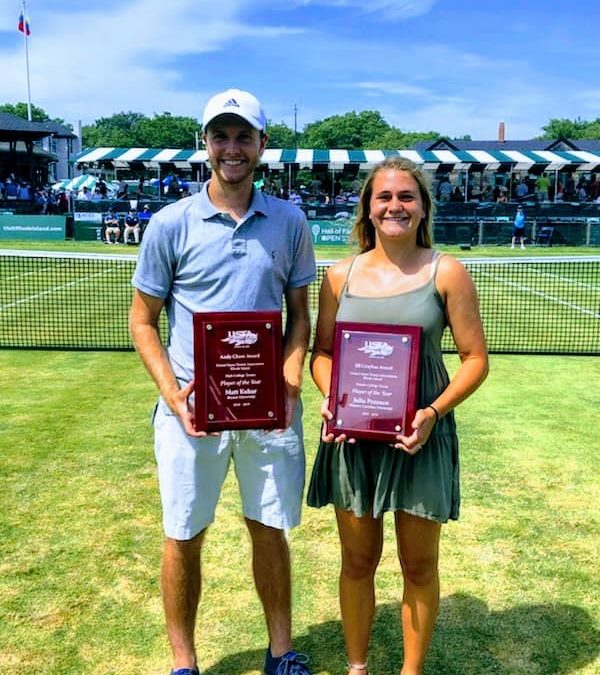 MATT KUHAR, JULIA PEZZUCO NAMED USTA RHODE ISLAND’S 2018-19 COLLEGE TENNIS PLAYERS OF THE YEAR
Bryant’s Kuhar earns his fourth Andy Chase Award; Western Carolina’s Pezzuco joins her sister as a Jill Craybas Award recipient, from the USTA state association.
NEWPORT, RI – Bryant University senior Matt Kuhar and Western Carolina University freshman Julia Pezzuco have been named USTA Rhode Island’s College Tennis Players of the Year, for the 2018-19 school year. Kuhar, from Smithfield, RI, is getting his fourth Andy Chase Award as the Ocean State’s top male player. Pezzuco, from Johnston, RI, is receiving the Jill Craybas Award, as the state’s female college player of the year.
The awards will be presented during an on-court ceremony at the Tennis Hall of Fame Open, Wednesday, July 17 in Newport. The awards are presented by USTA Rhode Island to the male and the female college players of the year who are from the Ocean State, but not necessarily playing at a Rhode Island school.
“These two awards are in line with our mission statement of promoting the growth and development of tennis in the state, including college tennis,” said Douglas Chapman, USTA Rhode Island’s President and CEO. “These awards are named after Rhode Island’s most successful college players of the past and have become a prestigious honor for the recipients.”
ANDY CHASE AWARD
Matt Kuhar completed his career as the most successful tennis player in Bryant University history, earning his fourth Andy Chase Award. Kuhar led Coach Ron Gendron’s Bulldogs to a 21-10 overall record and sixth consecutive Northeast Conference championship and NCAA Division 1 tournament berth.

In addition to all of his tennis accolades, Kuhar was selected Words Unlimited’s 2018 Rhode Island Male of the Athlete of the Year, which encompasses all athletes and teams in Rhode Island.
Kuhar completed his illustrious Bulldog career with yet another milestone, representing Bryant and the Northeast Conference at the NCAA Doubles Championships with partner Wilson Dong (Bradenton, FL).

Kuhar left his mark on the court and in the classroom. He finished his Bryant career with an 87-31 singles record. Kuhar became the first-ever Bryant tennis player to earn a national ranking, rising as high as No. 77, and, as high as No. 38 in doubles along with Dong, becoming the first doubles tandem to earn a national ranking in NEC history.
Kuhar finished his senior year 24-8 in singles and 18-10 in doubles play, including 4-0 in singles and doubles against NEC foes. He went 17-4 at No. 1 singles. Kuhar reached the quarterfinalsof the Oracle ITA Masters with wins over nationally-ranked players Zeke Clark (Illinois) and August Holmgren (San Diego). He also earned a win over nationally-ranked Tommy Mylnikov from Texas Tech
Kuhar was a success at Bryant from the start, earning NEC Rookie of the Year honors in 2015. He then proved his toughness, overcoming a back injury in 2015-16, to claim NEC Player of the Year honors in each of his final three seasons on the court. Kuhar went 18-1 in singles play against NEC foes and will graduate as a seven-time All-NEC honoree.
That stretch included another milestone. In 2017, Kuhar became the first Bulldog to win a set in an NCAA Tournament match when he blanked Oklahoma’s Andrew Harris (No. 32 nationally), 6-0, in the first set.
In the classroom, Kuhar was as magnificent as he was on the court. He has earned NEC Men’s Tennis Scholar-Athlete of the Year honors in each of the last three seasons and will earn his MBA from Bryant this summer. Matt is a Finance major and is the is the son of Mark and Mary Kuhar of Smithfield.
A 2014 graduate from Smithfield High School, he captured three RIISL state boys’ singles championships and led the Sentinels to the state team title in 2013 and 2014. He also captured the first New Balance National High School Tournament singles championship at Harvard in 2014.
JILL CRAYBAS AWARD
Julia Pezzuco follows in the footsteps of her older sister, Natalia, who received last year’s Craybas Award while competing for Union College.
Julia Pezzuco had an excellent freshman season playing at Western Carolina, a NCAA Division I member in the Southern Conference. She played in 21 matches for the Catamounts, turning in an overall record of 13-8. She also played in 21 doubles matches and was 14-7 overall, playing a majority of matches at No. 2 doubles with fellow freshman Jacy Smith (Bryan, Texas) with a record of 12-5 together. The Catamounts, coached by Bret Beaver, finished with a 12-10 dual match record.
Pezzuco is a graduate of the The Wheeler School in Providence, R.I., where she captured the Rhode Island Interscholastic League girls’ singles state title in 2016, and was also named the 2017 RI Girls’ Tennis Player of the Year. In 2015, Pezzuco reached the title round of the state tournament. Playing at the No. 1 spot in the Wheeler lineup the following season, she posted a 16-2 regular-season mark, with her only losses coming at the hands of the then three-time defending state champion Peri Sheinin. During the state tournament, Pezzuco won a tight-three set match in the final, dethroning Sheinin, and handing her the only defeat of her four-year high school career. Pezzuco became Wheeler’s third athlete (joining Marissa Alikpala ‘01 and Jane Forman ‘80) to ever capture the Rhode Island girls’ singles state championship.
The Johnston native finished her career as a two-time First Team All-State selection and a two-time First Team All-Division selection playing girls’ tennis. As a senior, she chose to play against the boys and earned Second Team All-State honors in Boys’ Tennis.

She earned a Silver Ball as a finalist at the USTA National Women’s Open Grass Court tournament and a Bronze Ball after placing third at the USTA National Mixed Open Grass Court. She also won several USTA junior tournament sportsmanship awards. She is the daughter of Richard and Dawne Pezzuco of Johnston.
ABOUT THE AWARDS
JILL CRAYBAS – A native of East Greenwich, Craybas is the most successful tennis player in Rhode Island history. She was a RIISL high school state singles champion for the Lincoln School and captured the 1996 NCAA singles championship for the University of Florida, when she was the National College Player of the Year. She is the only player in NCAA history to be a member of Division I championship teams at two different schools (Texas and Florida). A two-time SEC Player of the Year, she finished her college career with a 124-18 record. A Florida Gator Hall of Famer, she played nearly 20 years on the WTA Tour. She won the 2002 Japan Open and five doubles titles on the main tour. She was ranked as high as #3 in the US and #41 in the world. A regular for the US Fed Cup team. Her most notable result came at Wimbledon in 2005, where she defeated Serena Williams and Marion Bartoli.
ANDY CHASE – A native of Cumberland, Chase was the US National 16 & Under Hardcourt Singles Champion and a two-time national junior doubles champion. He won two RIILS state singles championships and team championship for Cumberland. He went on to play at Stanford University, where he was a teammate of John McEnroe. The Cardinal won three NCAA Division I team championships during his four years in Palo Alto.
AWARD RECIPIENTS
JILL CRAYBAS AWARD
2019 — Julia Pezzuco (Johnston), Western Carolina University
2018 – Natalia Pezzuco (Johnston), Union College
2017 – Evelyn Miller (Smithfield), Colby-Sawyer
2016 – Sadie Campanella (Chepachet), Rhode Island College
2015 – Rebecca Curran (Rumford), Williams College
ANDY CHASE AWARD
2019 –  Matt Kuhar (Smithfield), Bryant University
2018 – Matt Kuhar (Smithfield), Bryant University
2017 – Matt Kuhar (Smithfield), Bryant University
2016 – Eric Laboissonniere (Cumberland), Roger Williams University
2015 – Matt Kuhar (Smithfield), Bryant University
USTA RHODE ISLAND is the governing body of tennis in the state, and one of seven state associations that make up USTA New England, one of 17 sections in the country. Its mission is to promote and develop the growth of tennis in the Ocean State.
www.USTARhodeIsland.com